The H96 Max H2 Android box is without doubt one of the best value thin clients on the market. It combines a generous amount of system memory and storage capacity with competitive pricing and a recent Android build. This is an Android box – built by one factory and sporting various names – that can be used by businesses as a thin client to access cloud resources (and occasionally as a TV box thanks to a bundled remote control). Moreover, it manages to hit an incredible level of performance for not a lot of money.

Before we proceed further, it’s worth noting that if you do decide to buy this product, make sure you opt for the right model. Jumia Nigeria and Gearbest also stocks a cheaper 32GB variant, but the saving you make isn’t worth it in our opinion. Get the 64GB model.

What makes the H96 Max special is the fact that it is the cheapest Android box sporting 4GB memory and 64GB of storage, offering enough capacity for those looking to install a decent quantity of apps locally.

Let’s look at the positive look first. In today’s society where priority is preferred, if you don’t look beautiful, you lose half of your interest. The H96 max rk3318 tv box looks very cool, it is matched with purple and blue. The background color is black, and the gradient color looks more scientific and technological. If a word is used to describe this purple color, it is magical, right, it is the magic color. From this I have to admire this designer, the gradient is full of lines, a bit like Antarctic Aurora. We focus on the H96 max logo, which is not very different from before, but this time the design is very strong, blue and red are par

The device uses an ARM Cortex-A53-based quad-core processor, clocked at up to 1.5GHz, with an ARM Mali-450MP2 GPU and support for HDMI 2.0 (delivering proper [email protected] output).

As expected you get 802.11n Wi-Fi and Bluetooth 4.0 but no Gigabit Ethernet, which is a shame.

This is doubtless part of the cost-cutting to reach a low price point, and the same could be said for the use of USB 2.0 ports (in the majority).

That said, the 4GB of DDR3 memory and the 64GB eMMC on-board storage more than make up for these cut corners, especially at this price. 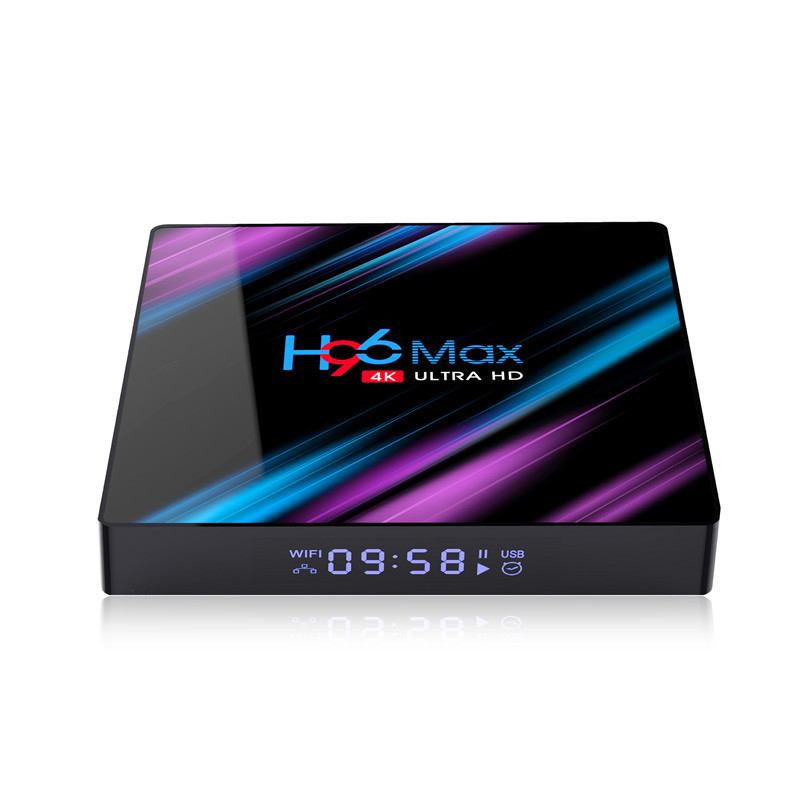 The front is very magical, let us see what this side is? Wow! It is an LED display with a USB icon, a wifi icon, a clock under the USB, a play icon, and a fast forward icon. The special point of this, wifi link will be displayed Let us experience the H96 max Android 10 tv box touch, smooth and flat, a bit like the touch of an Apple phone, of course, not as comfortable as an Apple phone. The display is also very good, and you can’t see any traces of processing. This shows that the appearance of this product is very high. On the right side of the display screen of Android TV box is the TF Card slot, which supports up to 32GB of memory expansion to meet the needs of most people, followed by the usb1 interface, which is USB2.0 and can be inserted into the USB2.0 flash drive. Near the usb1 is usb2, which is USB3.0 interface. It can use the high-speed USB flash drive of usb3.0, and USB3.0 is the selling point at present. Overall, this Android 10 TV box H96 MAX RK3318 card slot is very rich We shift our line of sight to the other side. The back of the clock display is the AV interface, HD interface, Ethernet interface, and DC power cable interface. As with other models, with these features, we will omit it Our Tech Friend at Gadgets Wright tooks it upon himself to unbox and review their YouTube channel after purchasing the H96 Max Rk3318 Android 10 Quad Core Smart Tv Box from US, Watch the Video Below, don’t forget to Like, Comment and Subscribe to His YOUTUBE Channel

We have finished watching, now let’s take a look at the parameter configuration of this H96 max rk3318 Android 9.0 tv box.

What Channels Are On The Android Box?

You shouldn’t really think about your TV Box as coming with “channels.” It is not the same thing as a cable subscription. It is a device that lets you cast the other services you want to access – such as Netflix and Prime TV – on your television screen. It doesn’t really come with any channels included; you have to procure these yourself.

Most of your favorite TV channels – such as ABC, CBS, CW, Fox, NBC, and PBS – all have streaming services, so you can access their programming without the need for a TV antenna or a cable subscription. Simply go to the website for your favorite channel and they will explain how to access it. Most of them have handy apps in the Google Play Store.

Can You Watch Normal TV On Android Box?

Yes, because there is an app for that – or more accurately, several apps. Again, your Android box is just a tool for streaming content. It is up to you to find the content you want to stream.

But all the big TV channels have apps available that let you stream their channels life and also catch up on what you have missed. There are also services, such as Direct TV,  that bundle a few popular channels together for streaming on your box. These feel a lot like cable TV but are delivered via your TV box rather than a cable.

How Do I Use An Android TV Box?

TV boxes are designed to be easy and intuitive to use, much like your smartphone. In general, all you really need to do is plug your TV box into your internet router, and then into your television, and the interface will appear on your screen.

The box, which usually comes with a dedicated remote, will then talk you through the simple set up process to get you to download your favorite apps. Many of the most popular apps, such as Netflix and YouTube, will already be installed.

Downloading and setting up apps on your TV box is pretty much the same as on your phone. If you want to do something different, like change your launcher interface, some more complex steps are required.

But one of the great things about Android is that there are so many enthusiasts out there figuring out how to get the most from the system. So, you should be able to find help and instructions with just a little Googling.

Do I Need An Android Box If I Have A Smart TV?

Smart TVs are televisions that come with a lot of the functionality of TV boxes built in. You can even buy a Smart TV that uses the Android TV operating system. So, for most people, if you have a Smart TV, you don’t need an Android TV Box. The Android Box is unlikely to add much functionality than you already have.

Is There A Monthly Fee For An Android Box?

An Android TV Box is a one-off purchase of the hardware and software, much like when you buy a computer or a gaming system. You don’t have to pay any ongoing fees to Android TV.

But that does not mean that an Android TV Box is free to use. Like your cell phone, your TV Box is pretty useless without a good internet connection.

What Should I Look For In An Android Box?

What you should look for in an Android TV box depends on your priorities. Are you interested in the best quality picture? Do you want rapid response so there is no waiting (loading screen of death!)? Do you just want something cheap to stream Netflix? If you know what you want to do with your device, you can prioritize what you need.

As a general rule, look for a box with a recent version of the Android operating system (certainly nothing older than 7), so that it will not become dated too quickly. Other priorities should be a quality processor, as this often dictates speed, and enough space to store and manage your favorite applications. On top of this, if you have a 4K TV and want to take advantage of its picture quality, choose a box that can deliver this.

Do You Need Internet For An Android Box?

Yes. An Android TV box lets you stream programming on your television, much like you do on your phone. And just like your cell phone, it needs an internet connection, whether you are streaming live or downloading to watch later. If you want to get the most out of your TV Box, you will need a strong internet connection.

How to Disable Samsung Pay